One of the key elements of fingerstyle guitar is the ability to use each of your fingers independently. This is especially important for the right thumb, as this finger plays the bass notes. The bass often leads the rhythm and groove of the music, which is why its coordination needs to be very steady.

Exercise 1
Each of the notes in this fragment is played with the thumb (this is indicated in the sheet music by the stems of the notes facing downward).
The most important aspect of this exercise is to keep the beat constant. Repeat the fragment a couple of times while trying to keep the beat as steady as possible. 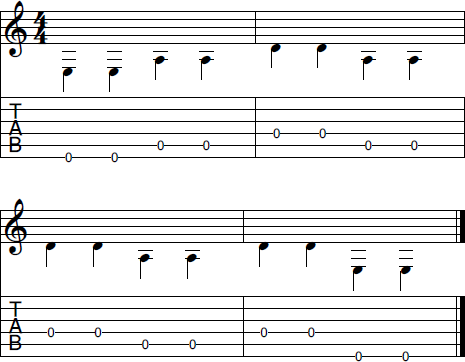 Exercise 2
Now also the left hand is involved. Each bar contains one or two fretted notes, while the right hand plays the same pattern everywhere. As seen before, the numbers in the sheet music indicate the recommended fingers to use for the fretted notes. The numbers 1, 2 and 3 correspond to the index, middle and ring finger.
The two dots at the end of the transcription denote that the fragment is repeated.

Exercise 3
In general, fingerstyle music sounds best when the strings are able to sustain for a long time. This is achieved by pressing the strings onto the frets as long as possible, and by making sure that strings are not touched accidentally. If the left hand fingers are positioned perpendicular to the fretboard, it is unlikely that these will accidentally mute an adjacent string.