It is possible to create a variety of percussive sounds on the guitar, as the soundbox responds differently depending on the location where it is hit. This lesson will not teach you how to turn your guitar into a drum kit however, but instead we show how to add percussive effects to traditionally played fragments. These percussive effects can be used to embellish the music.

A percussive effect is played at the start of the second, third and fourth bar. The right thumb is slapped against the lowest bass string, with just enough force for the strings to hit the frets at the end of the fretboard. As an addition the index, middle and ring finger can also be used to gently slap the strings.
In the last bar a different technique is used; the palm of the right hand slaps the sixth string against the fretboard as a percussive effect, and meanwhile the ring finger strums the melody strings. 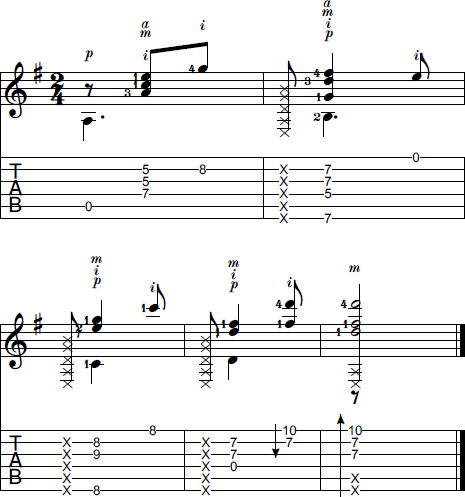 Exercise 2
The first note is played by shooting the index finger’s nail against the fourth string. Shortly after this the left ring finger plays a hammer-on, after which this finger slides upward. It should arrive at the seventh fret exactly on the first beat of the next bar.
Halfway through the second bar all the strings are slapped simultaneously. On the last beat of this bar a percussive harmonic effect is played; the index finger is stretched and it diagonally slaps the strings that are fretted, but at a very specific position. One should aim to hit the third string’s harmonic on the sixteenth fret and the fifth string’s harmonic on the nineteenth fret. By doing so the harmonic on the fourth string is automatically also played. 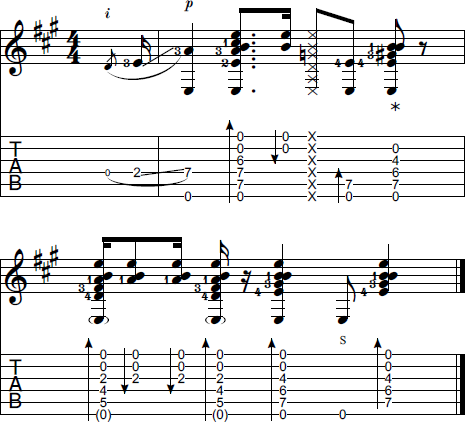 Exercise 3
Three different percussive effects are used in this fragment. After the regular notes on the first beat of each bar, the side of the thumb knocks on the guitar top. Then the fingertips of the index, middle and ring finger tap on the guitar top successively (not with the nails). These taps will sound similar but different fingers are used as they are played quite rapidly. Hereafter the thumb knocks on the top again, but now twice. At last both the index, middle and ring finger slap on the side of the guitar simultaneously.
This sequence of percussive effects is repeated multiple times but with different chords in between them.
Different from what you might expect, the x-markers in the transcription are not related to the strings played. They only indicate the rhythm of the percussive effects. 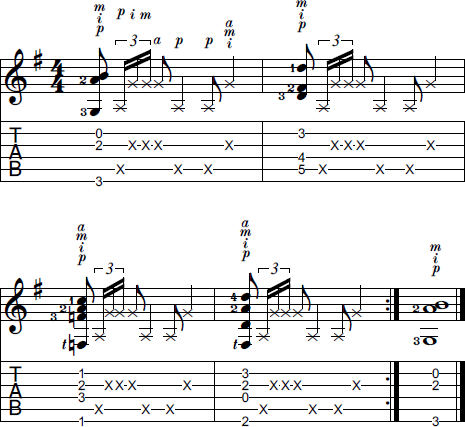