Fingerstyle guitar music contains many left hand shapes that are related to commonly used chords, which makes it useful to develop skills on playing chord shapes and rapid chord changes.
Six different chords are presented in the exercises on this page. These are combined with fingerpicking patterns that should be relatively easy to play for the right hand.

Exercise 1
The first exercise features the E chord. As no large stretches of the fingers are required for this chord, it is a suitable one to start with. The chord diagram above the sheet music indicates both the chord shape and the recommended fingers to use in order to fret the strings.
The middle and ring finger are positioned close to each other on the second fret of the fifth and fourth string. Both strings need to be fretted with the center of the fingertips, because if the fingers are not centered on the strings, they will probably unintentionally mute the third and sixth string. The chord shape is completed by fretting the first fret on the third string with the index finger. 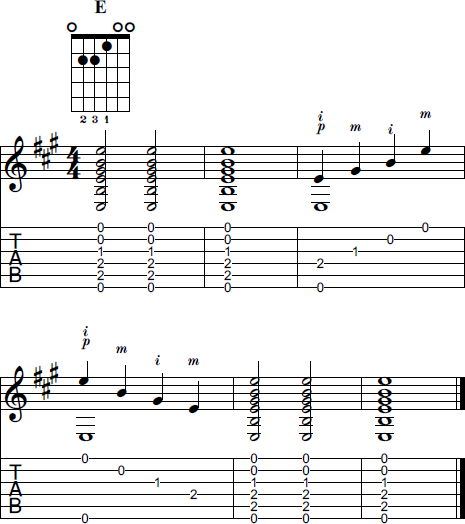 Exercise 2
The C chord is the most used chord in acoustic guitar music. A slight stretch of the hand is needed due to the positions where the second and fifth string need to be fretted, which will feel uncomfortable in the beginning.
It is important to always position the fingertips perpendicular to the guitar’s fretboard, as otherwise neighbouring strings might be muted accidentally. 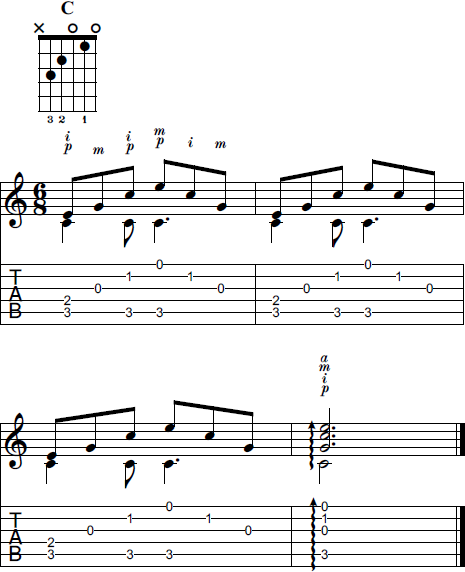 Exercise 3
This fragment starts with the A chord. At the start of the third bar the chord changes from A to D. It is advised to first learn the chords shapes by just strumming them, before playing the fingerpicking pattern.
The position change of the left hand fingers can be accomplished very smoothly;
First lift the middle finger from the fourth string. This enables one to play the first note of the third bar, which is an open string, and gives a bit of extra time for getting the D chord shape with the left hand.
The index finger should not be lifted, as for both the A and D chord this finger needs to fret the third string on the second position. Now slide the ring finger from the second to the third position. Lastly the middle finger needs to fret the first string on the second position, and then the chord change is finished. 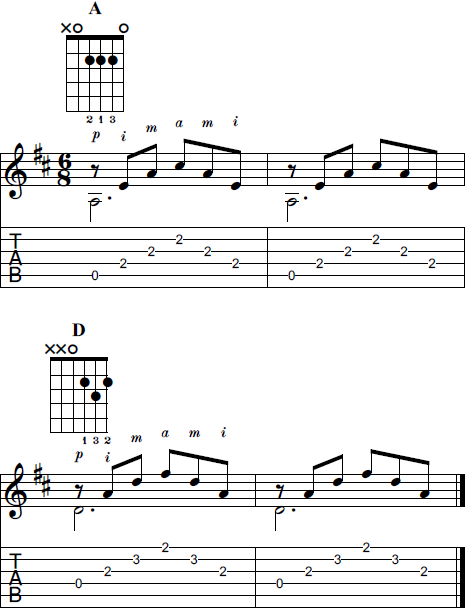 Exercise 4
The G chord is the most difficult chord in this lesson, as a large stretch between the ring and pinky finger is required. Meanwhile care should be taken to position the ring finger perpendicular to the guitar neck, because otherwise the fifth string will be muted.
This stretch may feel uncomfortable initially, but that will change after a couple of weeks of regular practicing. 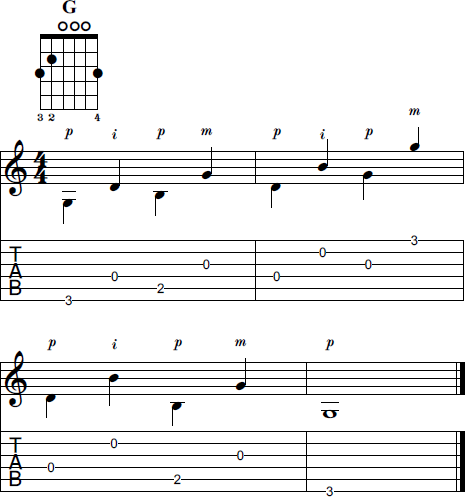 Exercise 5
The chords A minor, C, D and G belong to the most-used chords in music.
The shape of the A minor chord is similar to the E chord, which was presented earlier, but all left hand fingers are moved one string up. The sixth string should not be used when playing either the A minor chord or the C chord. For the D chord both the fifth and sixth string should not be played.

You will probably need some time for each of the chords to find the right shape of the left hand. It is recommended to start playing the fragment extremely slow in order to be able to keep a steady tempo, even during chord changes. The fragment should be repeated many times, and meanwhile you will get used more and more to the chord shapes. When you have succeeded in playing each of the chord changes smoothly you can try to increase the tempo. 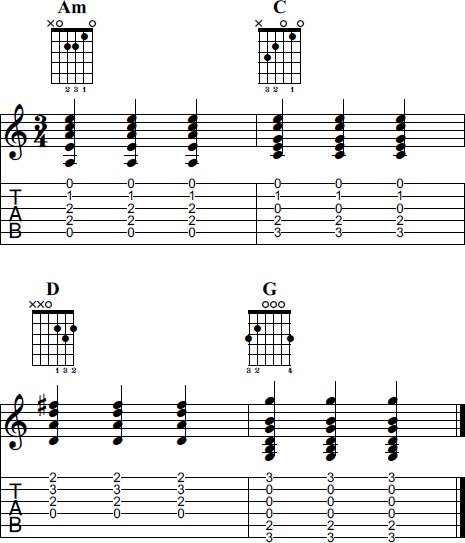