This website contains a large number of fingerstyle guitar lessons. Lessons are categorized as Beginner, Intermediate and Advanced level. It is our aim to provide challenging riffs, songs and exercises to everyone interested in fingerstyle guitar. 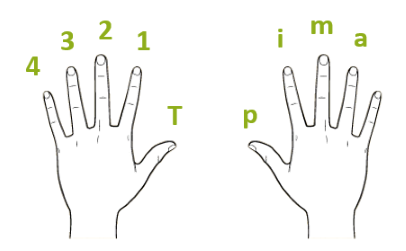 Tablature contains six horizontal lines that represent the strings of the guitar. The upper lines correspond to the treble strings, whereas the bottom lines correspond to the bass strings. Numbers on these lines indicate the position at which a string needs to be fretted in order to play a particular note. Open strings are denoted by a zero.

In this first exercise only the right hand is used, as all the notes are played on open strings.
It is important to find a comfortable position for your hand. For a fragment like this, where the bass strings are not used, it is good practice to have the right hand thumb rest on the thickest bass string. This string is commonly known as the sixth string.
The letters i and m above the sheet music indicate that you need to alternate between the index finger and middle finger. However, if this is the very first time you play the guitar it is recommended to first play the fragment while only using the index finger instead. The next step is to play the fragment by only using the middle finger. Once you have tried both of these ways, try the alternation between index and ring finger. 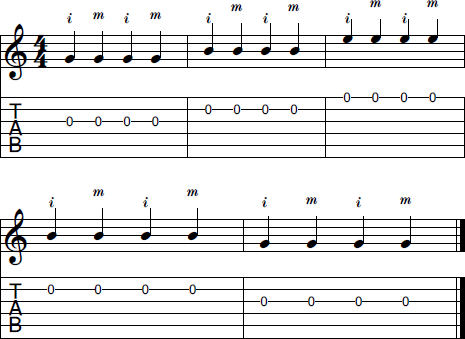 Now also the left hand is involved, while the right hand plays exactly the same string pattern as in the previous exercise.
The first note requires one to press the third string against a fret with the left hand. As can be seen in the tablature, the string needs to be fretted at the second position. The number 2 in the staff indicates that it is recommended to use the middle finger in order to fret the string. One should always aim to press on the string slightly behind the fret instead of right on top of it, as otherwise it will sound muted.
This fragment contains five bars. It is recommended to practice the bars one by one, repeating them numerous times before continuing to the next bar. 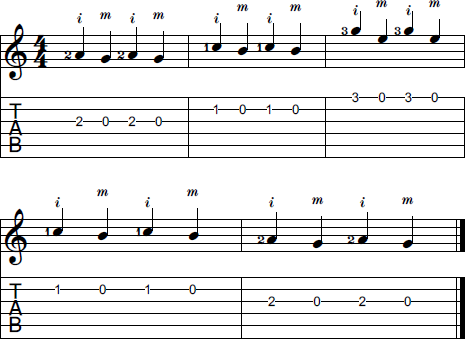 Only the first three frets have been used until now, but in this fragment all notes are played by either fretting the 7th, 8th, 9th or 10th position. As this are four adjacent positions, it is good practice to allocate each position to one particular finger of the left hand.
Always try to keep your fingers close to the fretboard at moments when they are not needed. This makes your guitar playing smoother, as one does not need to move their fingers over a large distance when they do need to fret a string later on.